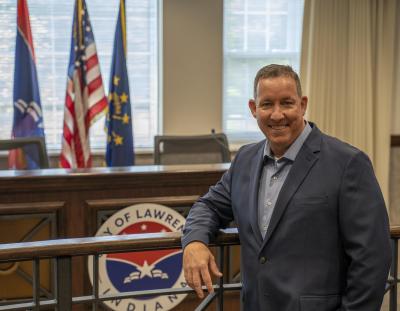 Dave began serving as the Chief of Staff for the City of Lawrence in March, 2022. In his current role of Deputy Mayor, he supports Mayor Steve Collier and his entire team of city leaders, employees and our elected officials in managing the many facets of city operations and positive growth. The ultimate goal is to make Lawrence the best and most welcoming place for people of all backgrounds to live, work, visit and play.

Prior to his appointment, Dave Hofmann led the Lawrence Police Department as its Chief since January of 2016.  His impact was significant as he championed the adoption our Body-worn video system that would soon serve as a model for Police Departments throughout Indiana.  Prior to accepting the role of Lawrence’s Chief of Police, Dave Hofmann served the Indianapolis Metropolitan Police Department as a District Commander. His experience in the public safety realm and his well-documented leadership skills will ensure that Lawrence continues to be a safe, desirable, and thriving city for everyone.