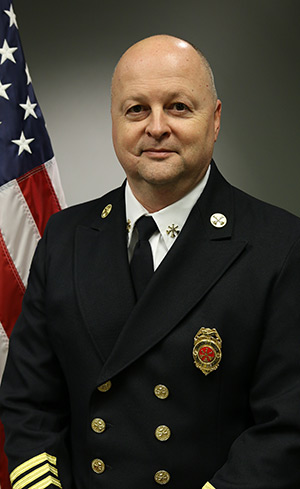 Eric Gamble was appointed to Fire Marshal of the Lawrence Fire Department August 1, 2016 by Chief Dino Batalis. As fire marshal, he is responsible for inspecting and maintaining code compliance for approximately 1,300 businesses and occupancies within the Lawrence Fire response area, as well as review of plans for code compliance issues for new businesses. Eric is also responsible for managing LFD’s fire investigation division.

Eric began his career in February 1999 and has continued to obtain certifications as a hazardous materials technician, Fire Officer II, Instructor II, insprecation, and investigations. He was promoted to lieutenant in October 2006 and he served as training chief from 2013-2016.

In his 18 years of service, he has served on many specialty teams for events such as the Super Bowl, NCAA tournaments, Big Ten events, as well as Colts and Pacer games. He is also a nationally recognized and certified CFEI (Certified Fire & Explosion Investigator) and has been through several classes through the Department of Defense and Department of Energy to better himself and to serve LFD and the citizens of Lawrence.